This report provides estimates of the VAT Gap for 26 EU Member States for 2012, as well as revised estimates for the period 2009-2011. It is a follow-up to the report “Study to quantify and analyse the VAT Gap in the EU-27 Member States”, published in September 2013.

This update incorporates the NACE Rev. 2 classification of economic activities into the calculation of the theoretical liability.

The year 2012 saw overall unfavourable economic developments, as the GDP of the European Union shrank by 0.4 percent. These developments contributed to a slowdown of nominal final consumption and of other economic activities that form the basis of the Value Added Tax.

A few countries applied changes to standard or reduced rates, but on the whole the structure of VAT rates was relatively stable compared to the numerous changes in the wake of the onset of the Great Recession in 2008-2009.

For the EU-26 as a whole, VAT revenues grew by slightly over 2 percent, from Euro 904 billion in 2011 to Euro 922 billion in 2012; and the theoretical VAT liability (VTTL) also grew by a similar percentage.

The overall VAT Gap, as estimated according to the refined methodology, for the EU-26 saw a slight increase in absolute numbers (of about Euro 6 billion) between 2011 and 2012, to reach Euro 177 billion, but remained essentially stable as a percentage of the overall VTTL, at 16 percent.

The estimates for 2009-2011 have been revised because of the switch to NACE-2 classification and refinements in the methodology, and are slightly lower compared to those discussed in the 2013 VAT Gap report. In 2012, Member States’ estimated VAT Gaps ranged from the low of 5 percent in the Netherlands and Finland, to the high of 44 percent in Romania.

The median absolute change in the VAT Gap of the individual Member States from 2011 to 2012 was 1.1 percent, with a number of countries registering considerably higher changes.

Overall, 11 Member States decreased their VAT Gap, with the largest improvements noted in Greece, despite the depth of its recession, and Bulgaria. However, 15 Member States saw an increase in the VAT Gap, ranging from virtually nil (e.g., Slovenia) to a substantial deterioration (e.g., Slovakia, Poland).

This report also provides estimates of the Policy Gap for the EU-26. This is an indicator of the additional VAT revenue that a Member State could theoretically collect if it applied uniform taxation to all consumption. Estimates of the Policy Gap confirm the finding that in most countries the loss of revenue compared to an “ideal” system with no reduced rates and no exemptions, is due to a greater extent to policy decisions than to non-compliance and weak enforcement. 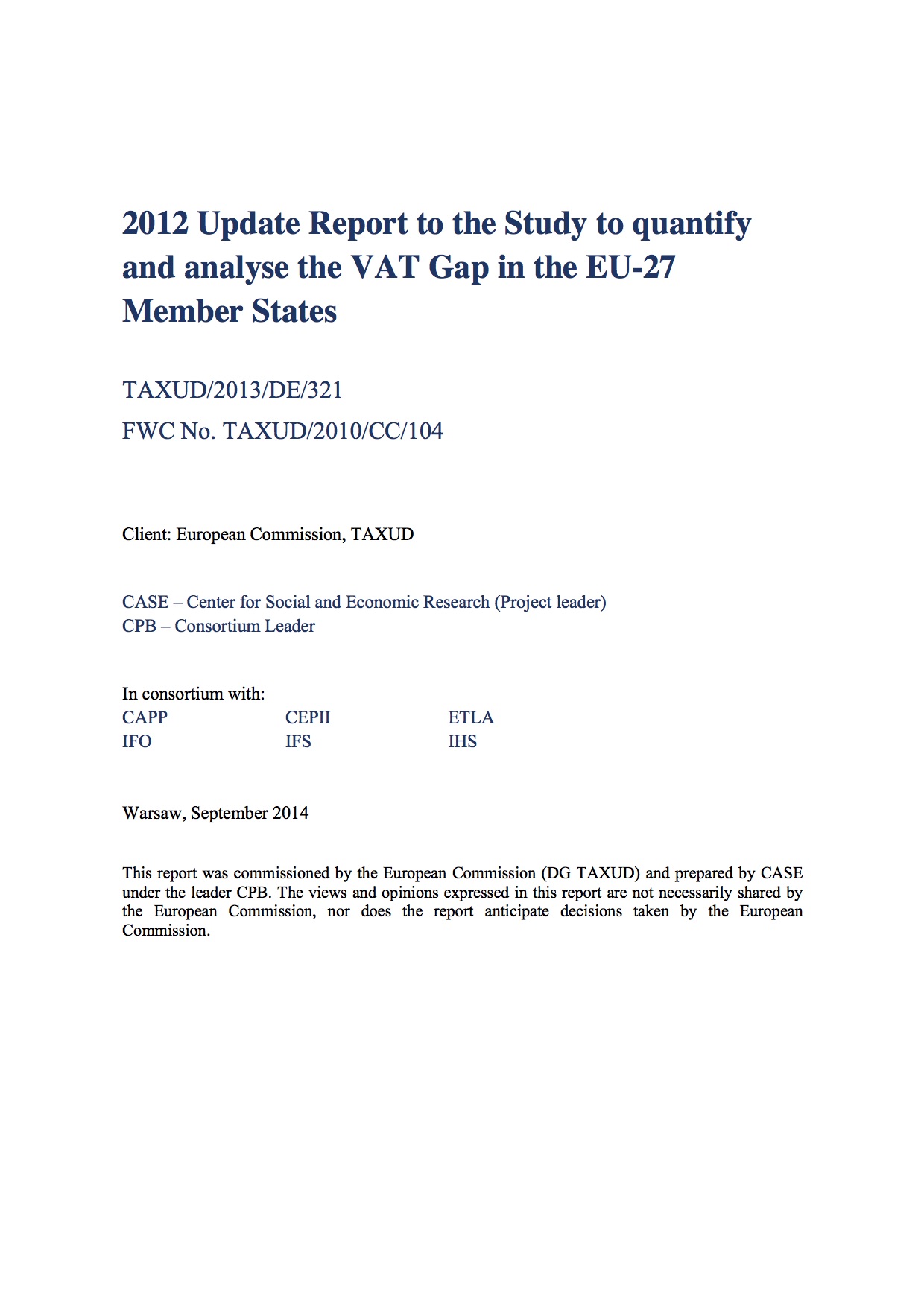