EU - Overview of the European Parliament's initiatives on taxation 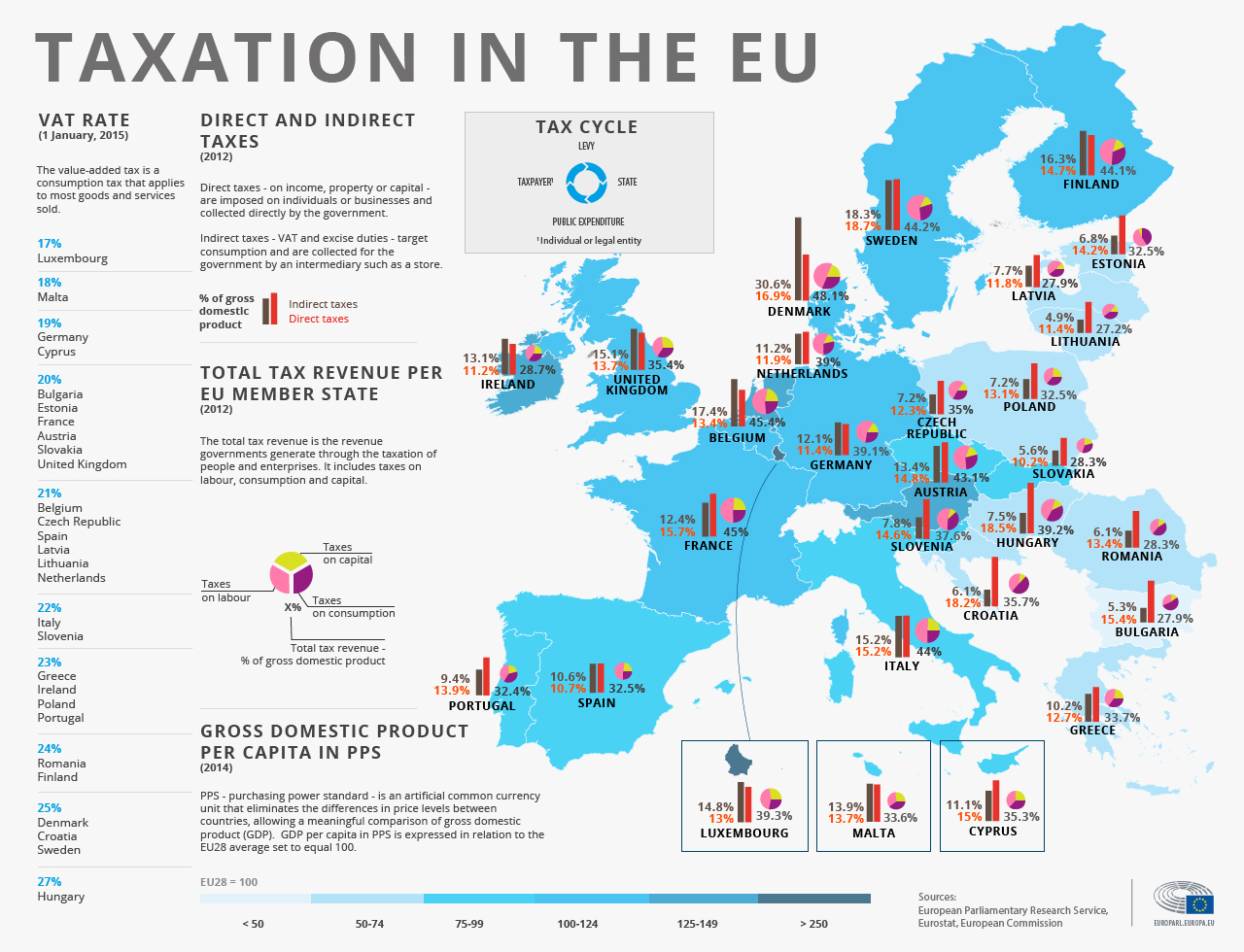 The fight for fair taxation in the EU is high on Parliament's agenda following the revelations as a result of LuxLeaks and the Panama papers. At a time when EU countries are struggling to recover from the crisis, MEPs are pushing for greater transparency and an end to tax unfair practices.

Parliament has set up two special committees to look into tax rulings and is in the process of launching an inquiry committee to investigate the Panama Papers.

Tax rulings are written statements issued by a tax authority, setting out in advance how a corporation's tax will be calculated and which tax provisions will be used. Tax rulings have sometimes been criticised when multinationals are found to pay less in taxes than ordinary tax payers. Parliament has set up two special committees to look into them.

Last November the first special committee on tax rulings published its final report, setting out ideas for fair and transparent taxation across the EU. Its work is continued by the second tax rulings committee. Launched in December 2015, it is working on a report outlining the necessary steps to fight corporate tax avoidance.

Following the revelations in the Panama papers, Parliament decided to set up an inquiry committee. Its mandate will be confirmed during May's plenary session in Strasbourg.

Recommendations to fight aggressive corporate planning were adopted by MEPs in December 2015. This report spelling out the legal steps that the EU and the member states should take was based on the work of the first tax rulings committee. Among others, Parliament called for the European Commission to produce a legislative proposal n country-by-country reporting of companies' profits, tax and subsidies. As a result the Commission announced its plans in April 2016. MEPs also demanded an EU-wide definition of tax haven and the Commission is currently working on a proposal.

In May 2015 MEPs adopted tougher rules on money laundering. The anti-money laundering directive will oblige member states to keep central registers of information on who owns companies and other legal entities.EU countries have until 26 June 2017 to implement the new legislation. The Panama papers underlined the importance of these new rules.

Parliament was also consulted on a proposal on the exchange of information on tax rulings between EU countries. The Council adopted the directive last December. Parliament called the Council's deal a "missed opportunity" as the new rules only apply to cross border rulings but leave out tax deals within member states. MEPs also criticised the fact that the Commission was only given limited access to the information.

Parliament is being consulted on corporate anti-tax avoidance measures. This legislation is the EU's response to the OECD's action plan to tackle base erosion and profit shifting. This refers to tax planning strategies that exploit loopholes in the international tax system to artificially shift profits to places where there is little or no economic activity or taxation, resulting in little or no overall corporate tax being paid. The EU's plans contain six key measures which all EU countries should apply. One of the measures, for example, is to prevent profits being shifted to a country with lower or no taxes. MEPs are due to vote on Parliament's position in June.

In addition Parliament is being asked to voice its views on plans concerning tax authorities exchanging tax reports by multinationals that have global revenues of more than €750 million. According to the proposal, these large multinationals have to file a country-by-country tax report in the member state where the parent company is legally based. This member state must then share this information with other member states where the company operates. Parliament's economic committee has called for the Commission to have full access to this information. MEPs are due to vote on the Parliament's position in May.

Parliament plays a key part in public transparency rules for multinationals. Multinationals with global revenues of more than €750 million would have to make information on where they make their profits public and also where they pay their taxes in the EU on a country-by-country basis. MEPs asked for this in a report adopted in December and as a result the Commission published a report on this in April. It is not known yet when MEPs will vote on the plans in plenary.

Later this year the Commission is planning to propose legislation on a common corporate tax base. In addition it is expected to publish a proposal on a common list of non-cooperative tax jurisdictions, more commonly known as tax havens.

Our infographic above shows the income from direct and indirect taxes for each member state as well as total tax revenue as a percentage of the gross domestic product. The latter is divided between taxes on capital, consumption and labour. In addition our map shows how wealthy countries are.