Fighting tax evasion and avoidance: a year of progress 2013

Why has the Commission made fighting tax fraud and evasion a priority?

Every year, billions of euros of public money are lost in the EU due to tax evasion and tax avoidance. As a result, Member States suffer a serious loss of revenue, as well as a dent to the efficiency their tax systems.

Businesses find themselves at a competitive disadvantage compared to their counterparts that engage in aggressive tax planning and tax avoidance schemes.

And honest citizens carry a heavier burden, in terms of tax hikes and spending cuts, to compensate for the unpaid taxes of evaders. Fighting tax evasion is therefore essential for fairer and more efficient taxation.

The cross-border nature of tax evasion and avoidance, along with Member States’ concerns to maintain competitiveness, make it very difficult for purely national measures to have the full desired effect. Tax evasion is a multi-facetted problem requiring a multi-pronged approach, at national, EU and international level.

EU Member States need to cooperate closely if they are to increase the fairness of their tax systems, secure much needed tax revenues and help to improve the proper functioning of the Single Market.

In addition, the “strength in numbers” of the EU acting as a united block helps give more weight in achieving faster and more ambitious progress at international level in the area of tax good governance.

What progress has been made in fighting tax evasion and avoidance at EU level over the past year?

This Action Plan kick-started what has become a highly intensive EU campaign to better fight these problems. It was endorsed at the European Council in May, where EU leaders called for effective steps to be taken to combat tax evasion and avoidance.

In the 12 months since the Action Plan was presented, there has been remarkable progress in this area at EU level, and a number of important new initiatives have been put forward by the Commission. Among the actions taken in 2013 were:

The active work at EU-level was also mirrored in the active role that the EU played in pushing forward international discussions to improve tax good governance worldwide (see below).

Where is there room for greater action at this stage in the fight against tax evasion and avoidance in the EU?

First and foremost, agreement is needed on the Savings Tax Directive (MEMO/12/353) before the end of 2013, as called for by the European Council in May. This is crucial to close loopholes in the Savings Directive, and ensure that it can continue to work well.

An EU-wide framework for automatic information exchange will also give banks more legal certainty and clarity about reporting obligations.

In addition to substantially reducing administrative burdens for businesses, the CCCTB has the potential to eliminate many opportunities for profiting by multinational companies. This is recognised in the OECD’s action plan against Base Erosion and Profit Shifting (BEPS), and agreement on the CCCTB would ensure that the EU is the standard setter in this area.

As stated in last year’s Action Plan, the Commission would encourage Member States to make better use of the Code of Conduct on Business Taxation.

This can be a highly effective tool for identifying and eliminating harmful tax regimes within the EU. The Commission is currently considering ways of strengthening the Code, for example by extending its scope or amending the Code criteria.

And the 2013 Annual Growth Survey again called on all governments to step up their national campaigns against tax evasion, and strengthen their coordinated action to tackle aggressive tax planning and tax havens.

Meanwhile, the Commission is continuing work on the medium and long-term actions set out in the Action Plan against tax evasion last year. These include a Taxpayers’ Code, an EU Tax Identification Number and possibly common sanctions across the EU for tax offences.

What has been achieved at international level to improve the fight against evasion and avoidance, and what has been the EU’s contribution to this?

First, they confirmed a move to greater international tax transparency, by agreeing that automatic exchange of information should be the new global standard of cooperation between tax administrations.

Second, they endorsed the OECD’s BEPS action plan to curb corporate tax avoidance worldwide. These measures confirm a major improvement in international taxation – one that will make it fairer, more effective and better equipped for the 21st century economy. With the political commitment made, the focus is now on implementing these changes.

With regard to the automatic exchange of information, the EU has drawn on its own experience and expertise in this area to actively contribute to the development of the new global standard.

In particular, the Commission has tried to ensure that the global standard takes into account the existing EU automatic information exchange arrangements and is compatible with EU law (e.g. data protection), so as to avoid any unnecessary difficulties for businesses.

The latest draft of the global standard appears to meet at least most EU needs, and the OECD intends to present the final version to the G20 Finance Ministers in February for agreement.

Meanwhile, the BEPS Action Plan complements the EU measures to tackle aggressive tax planning, while also addressing issues that can only be effectively dealt with at international level.

The BEPS action plan sets out 15 specific actions to re-adjust international standards in taxation so that they are better shaped for the changing global economy.

Over the next year, new rules and standards will be developed in areas such as permanent establishment, transfer pricing and digital taxation.

The aim is to protect the fairness and integrity of tax systems, and better equip governments in their clamp down on corporate tax avoidance.

The EU has already valuable experience in various areas covered by BEPS such as transfer pricing and tackling hybrid mismatches.

And the work of the Commission’s expert group on digital taxation will provide input for the OECD digital taskforce.

With this input and experience to offer, the EU can continue to play a central role in the work to implement BEPS, particularly if a strong, coordinated position is maintained amongst all Member States. 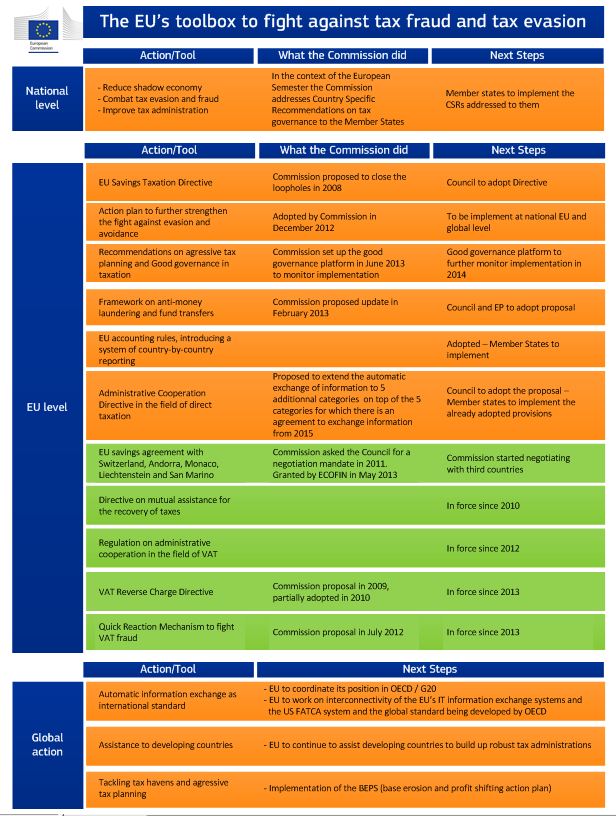 Tax evasion has to exceed £70 billion