The Commission has welcomed today's unanimous agreement by Member States on the automatic exchange of information on cross-border tax rulings, just seven months after the presentation of the Commission's ambitious proposal on the subject.

The new rules should lead to greater cooperation between Member States on tax matters and act as a deterrent from using tax rulings as an instrument for tax abuse. All Member States will be equipped with the information they need to protect their tax bases and effectively target companies that try to escape paying their fair share of taxes. The agreement was reached at a meeting of Economic and Financial Affairs ministers in Luxembourg.

Following the announcement of the agreement, Jean-Claude Juncker, President of the European Commission said:

"I warmly welcome today's agreement as a major step forward. The automatic exchange of information on tax rulings will provide national authorities with insight on aggressive tax planning. It marks a leap forward in our efforts to advance on tax coordination and tax harmonisation. The current system of corporate tax rules is unjust and unfit for purpose. There is a plethora of national rules that allows some companies to win, while others lose out. This unfair competition is anathema to the principles of fair competition within our Internal Market."

"All EU Member States have today agreed to share more information on tax rulings given to companies which operate cross-border. This is a major step in combating aggressive tax planning, creating greater transparency in corporate taxation and in providing fairer competition for both businesses and consumers. I see today's agreement as an important signal that Member States are ready to deliver on our common goal of fair and effective taxation. The EU will continue to work to implement these transparency rules worldwide."

What are the key elements of the new rules?

Currently, Member States share very little information with one another about their tax rulings. It is at the discretion of the Member State to decide whether a tax ruling might be relevant to another EU country. As a result, Member States are often unaware of cross-border tax rulings issued elsewhere in the EU which may have an impact on their own tax bases. The lack of transparency on tax rulings can be exploited by certain companies in order to artificially reduce their tax contribution.

To redress this situation, the new rules agreed today will require Member States to automatically exchange information on their tax rulings. The directive will remove Member States discretion to decide on what information is shared, when and with whom.

These rulings - defined widely so as to capture all similar instruments and irrespective of the actual tax advantage involved - will have to be exchanged every six months. The agreement will also cover existing rulings of the past five years. Member States will then be able to ask for more detailed information on a particular ruling.

The automatic exchange of information on tax rulings will enable Member States to detect certain abusive tax practices by companies and take the necessary action in response. It is expected that this initiative will deter tax authorities from offering selective tax treatment to companies once this is open to scrutiny by their peers. This will result in much healthier tax competition.

In addition, the Commission will regularly receive the information it needs in order to monitor the implementation of this directive and ensure that Member States are complying with their responsibilities.

Member States will have to transpose the new rules into national law before the end of 2016, meaning that the Directive will come into effect on 1 January 2017.

The EU Commission proposal to make it mandatory for EU member states to exchange information on their tax rulings received only a lukewarm welcome in Parliament’s Economic and Monetary Affairs Committee on Tuesday. However, the report by Markus Ferber (EPP, DE), voicing dismay at the directive’s limited scope and late entry into force, has already been overtaken by last week's ECOFIN Council deal, which watered down the Commission proposal even further.

The report was approved by 49 votes in favour, 0 against and 6 abstentions.
"Disappointed"

Parliament’s rapporteur Markus Ferber is disappointed about the Council agreement:

"If this is the final text, member states will have missed a great opportunity to create more transparency in taxation. National budgets will continue to suffer.

We need an EU-wide systematic and mandatory procedure. For the moment, member states' tax authorities would not realise that tax ruling deals forged in other member states are undermining their own tax bases.

Tax authorities should be obliged to exchange information on tax rulings and make them available to a central database at the European Commission.

There is also a competition side to tax rulings. This is why the Commission must be empowered to access and use the data to investigate tax avoidance and dumping practices and to assess whether they are in line with state-aid rules.

Why are member states clearly denying the Commission access to these data? Are they hiding something?

What MEPs want, compared to what the Council agreed

MEPs would prefer the directive to apply to all tax rulings, not just "cross border rulings and advance pricing arrangements", given that purely national transactions can also have cross-border effects. The Council made the directive’s scope "cross-border only".

Commission not in the loop

The Council also ensured that the European Commission is explicitly not allowed to do anything with the information - to which the Commission only has very limited access - other than overseeing that it conforms to the directive, and that the directive is properly applied.

MEPS want the automatic exchange of information to start as soon as possible, whereas the Commission proposes that it should start on 1 January 2016. The Council agreed on 1 January 2017.

MEPs insist that the information should be communicated "promptly after the ruling or price arrangement is issued" rather than "within one month following the end of the quarter during which the ruling was issued" as the Commission proposes. The Council deal says that the information should be provided "within three months following the end of the half of the calendar year during which the ruling was issued". This means that if a ruling is issued in January, the mandatory exchange of information can take place until 30 September.

The procedure for amending this Council directive is consultation. The Council struck its informal deal on the Commission proposal at the 6 October meeting of Economy and Finance (ECOFIN) ministers.

The directive is to be adopted at a forthcoming Council meeting, once the European Parliament has given its opinion and it has been finalised in all official languages. The new rules are to apply from 1 January 2017. Until then, existing obligations to exchange information among member states will stay in place.

The final BEPS report includes changes to the definition of PE for income taxes of Article 5 of the OECD Model Tax Convention. Action 7 broadens the threshold to determine when such PE status exists. Currently such a PE status does not exist for commissionaire arrangements and the specific activity exemptions in treaties, such as warehousing, purchasing and “preparatory and auxiliary activities.

The indirect tax definition of a fixed establishment (FE) is different from a PE and has its foundation in EU VAT law and should therefore not be affected by the BEPS initiative or OECD definition. Some countries however do (still) not accept the absence of a FE once a PE has been established. Note that the amount of PEs will increase when "Action 7" is in force.

As businesses are facing global challenges it makes sense that the existing business model is reevaluated and amended when necessary to meet the new PE environment. That most likely means moving away from a commissionaire structure?

I advise multinational businesses in improving the efficiency and effectiveness of their Indirect Tax Function and Tax Control Framework.

I started my career as a manager at Arthur Andersen and then became a partner in EY where I led the indirect tax performance team for Netherlands and Belgium. Currently I am a senior managing director of Phenix Consulting.

I have over 20 years’ experience advising clients on international VAT issues. I am specialized in the tax aspects of financial transformations, shared service centre migration, and post merger integration work. I am also somewhat of a mentor, giving back to the profession. If you are interested in conversation and discussion, please feel free to contact me.

In essence, HRMC’s increases its expectations towards large businesses with regard to a more and more transparent tax management strategy. However, the publication of a tax strategy will clearly not be sufficient. It is just the starting point for the provision of a clear picture about the risk management and controls in place of tax relevant processes. The daily management turns on the radar.

In difference hereto, the view into the current daily practice provides a different and non-compliant picture:

Widespread use of Excel spreadsheets, decentralized storage of tax relevant documents, lack of documented controls, lack of automation, global lack of tax compliance software tracking individual changes and filings, lack of standardized reports immediately available upon request, lack of in-built double-checks for the calculation of current and deferred taxes on reporting entity level, lots of tax relevant data stored at external outsourcers (e.g. external tax advisors and accounting firms), several tax software tools in place at various locations which are neither interfaced among each other and with the ERP systems in place, etc.

It is obvious that tax departments which are not adapting its process management to the requirements addressed by HMRC and other tax authorities may struggle with regard to compliance, efficiency and transparency. 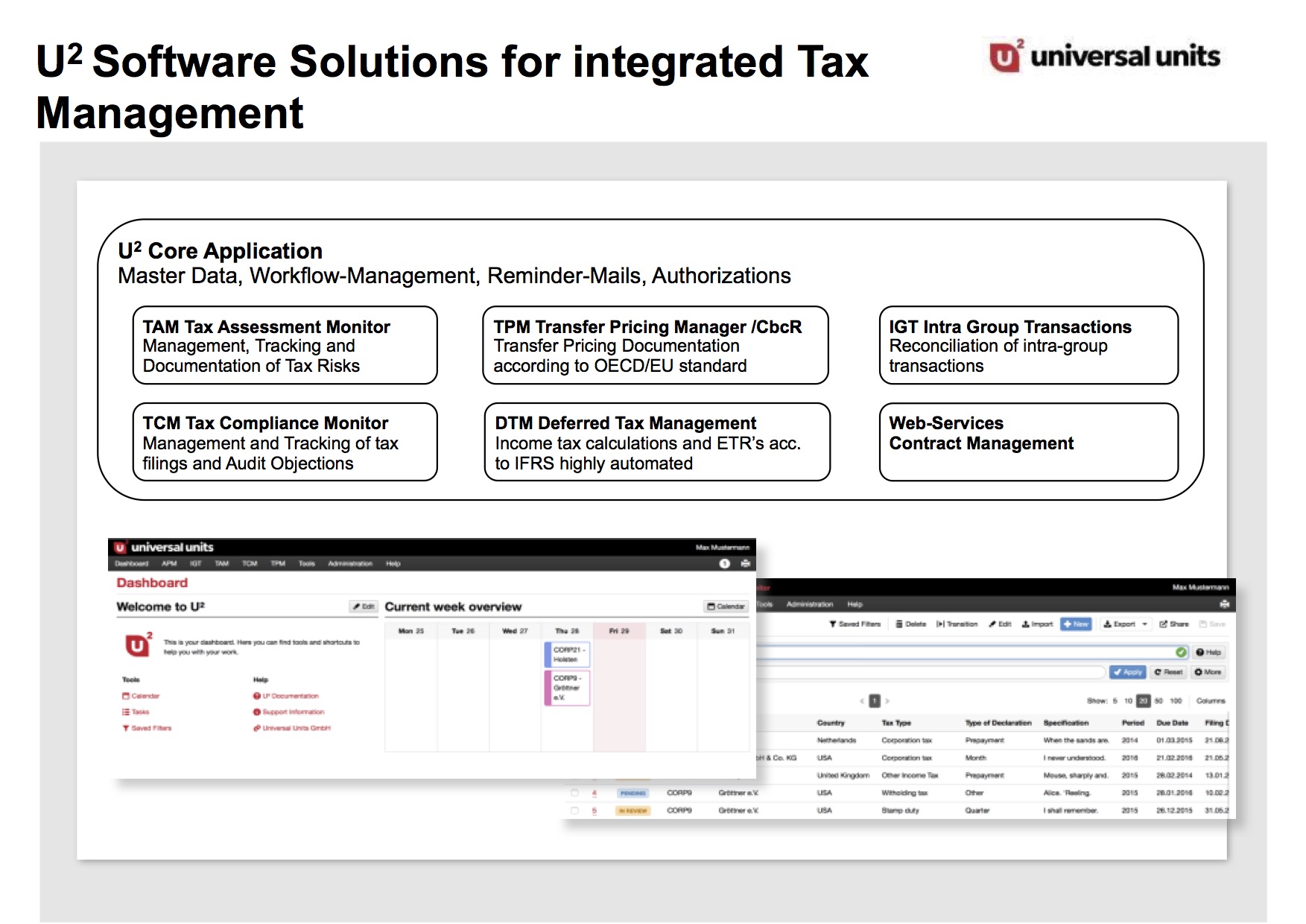 Certified Taxable Person
Towards a new and definitive VAT system for the EU
How to get from A to B
VAT Control Framework
Scope of work
A roadmap for a documented indirect tax strategic plan
The right people in the right roles
Structure the tax function
Specific SAP VAT areas of attention
When is standard SAP (in)sufficient?
Implementation activities for SAP
Roadmap for VAT introduction in GCC when operating SAP
Table of Contents